Europe-wide association with ambitious goals – A week ago today, the European Equestrian Business Association (EEBA) was launched in Cologne. Under the motto “One Passion, one Voice!”, the association wants to act as an advocate vis-à-vis the public and politics for all professional groups and companies active in the equine sector – from industry to science, service providers to media. The association ́s president is Olympic champion Ingrid Klimke.

The European Equestrian Business Association has set itself several goals. Above all, the intention is to speak with one voice in Brussels for the horse industry, which has an annual turnover of 112 billion euros and secures 900,000 jobs around the horse.

This is to be achieved in different areas.

Given the economic importance of the equine sector, lobbying is high on the association’s to-do list. The circle of 35 founding members, who came together on the premises of the Köln Messe, represents a broad industry portfolio. Manufacturers and retailers, representatives from science, event organisers and service providers. Great importance will be attached to the working groups recruited from these areas, which are to start their work quickly. Sustainability and animal welfare are buzzwords on which there is a lot of focus. As well as consumer protection, keyword: Safety! This topic is also one for which the President of the EEBA, Olympic champion Ingrid Klimke, is on fire:

“We are more powerful when we join forces! This also concerns the safety of our equipment as sport riders. For demonstrably good quality, quality features and seals of approval are needed, which will be assessed according to uniform standards. I see it as a great opportunity to combine all our know-how and to have a direct influence on sustainability and animal welfare in our industry by continuously improving our equestrian products. Everything we can improve and develop directly helps the horse and points the right way to the future of the horse industry!”

Quality seals are planned whose standards will enjoy worldwide recognition. This is an important project to advance the testing of new developments.

What do consumers expect? This is also a cross-sectoral issue that the association wants to address. Comprehensive market research is a declared goal and the joint exchange of industry, equestrian sport and breeding associations, educational institutions and event organisers is strived for – networking, which is here to stay and which is becoming increasingly important in the equine sector, having not been cultivated as intensively in the past as it in other industries. The EEBA sees itself both as a platform that offers its members the space for exchange and self-expression with digital offers and as an association that wants to give new impulses to the industry from its centre.

Kölnmesse also wants to set new impulses at spoga horse, which is also one of the founding members of the new interest group, next spring. During the founding event, their new concept was presented. It provides for an expansion of the product portfolio on the exhibitor side and the circle of trade visitors as well as additional digital offers, which make the trade programme and networking accessible beyond the live event. In addition, as the leading B2B trade fair for the global equine industry, it will provide the ideal setting for the annual general meetings of the members of the EEBA.

In spontaneous statements, the founding members present in Cologne expressed how great their interest in the activities of the EEBA is and how much they are looking forward to the first meetings in the working groups so that the idea can soon be followed by concrete action.

It is for purpose, and this is also reflected in the structure of the membership fees, that the European Equestrian Business Association is not only intended to be a community of the “big ones”. Service providers who do not generate millions in turnover in their work with horses have the opportunity to participate in the EEBA for a low three-digit annual fee and make their voice heard as well – „ONE PASSION – ONE VOICE! “

EEBA ́s 1st Chairman Stefan Schwanbeck is sure that it will be possible to make the members’ concerns heard at European level with a unified presence: ”There are different associations and federations that advocate for the interests of their sectors. We do not see ourselves as competitors, but as an overarching complement and are pleased that, for example, the German Horse Industry Consulting GmbH (GHI) is one of our founding members and other established initiatives such as BETA from Great Britain have already confirmed their membership. We want to speak for all of them in Brussels and make even better, more sustainable offers to consumers, whether they are top athletes, leisure riders or people who actively work with horses in therapy or agriculture.”

We would be happy to send you the EEBA logo in printable resolution.

The European Equestrian Business Association at a glance: 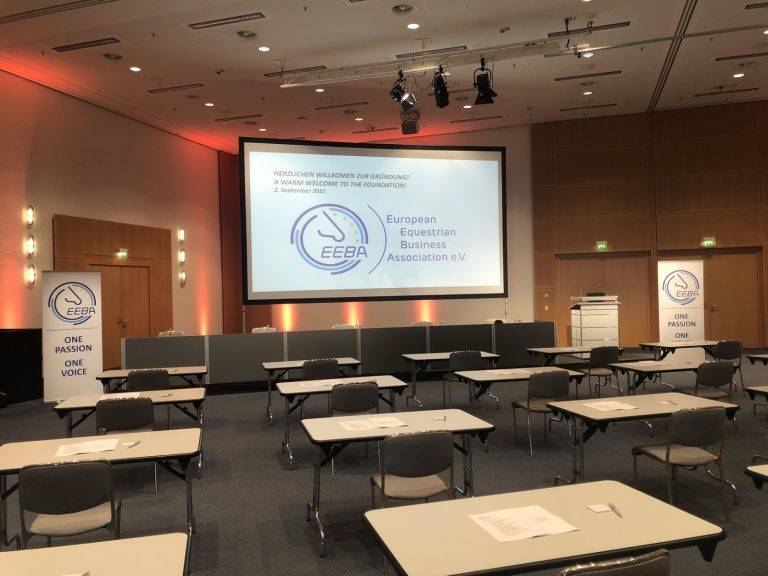 December 22, 2021
We use cookies on our website to give you the most relevant experience by remembering your preferences and repeat visits. By clicking “Accept All”, you consent to the use of ALL the cookies. However, you may visit "Cookie Settings" to provide a controlled consent. Read our "data protection" for more details.
Cookie SettingsAccept All
Manage consent

This website uses cookies to improve your experience while you navigate through the website. Out of these, the cookies that are categorized as necessary are stored on your browser as they are essential for the working of basic functionalities of the website. We also use third-party cookies that help us analyze and understand how you use this website. These cookies will be stored in your browser only with your consent. You also have the option to opt-out of these cookies. But opting out of some of these cookies may affect your browsing experience.
Necessary Always Enabled
Necessary cookies are absolutely essential for the website to function properly. These cookies ensure basic functionalities and security features of the website, anonymously.
Functional
Functional cookies help to perform certain functionalities like sharing the content of the website on social media platforms, collect feedbacks, and other third-party features.
Performance
Performance cookies are used to understand and analyze the key performance indexes of the website which helps in delivering a better user experience for the visitors.
Analytics
Analytical cookies are used to understand how visitors interact with the website. These cookies help provide information on metrics the number of visitors, bounce rate, traffic source, etc.
Advertisement
Advertisement cookies are used to provide visitors with relevant ads and marketing campaigns. These cookies track visitors across websites and collect information to provide customized ads.
Others
Other uncategorized cookies are those that are being analyzed and have not been classified into a category as yet.
SAVE & ACCEPT